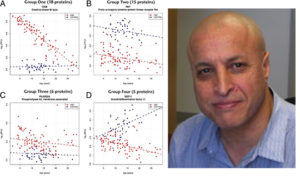 There is increasing interest in pharmacodynamic biomarkers, defined as proteins in the blood that show response to a drug.  The implementation of biomarkers into a drug development program very much depends on ‘context of use’ – How exactly is the biomarker going to be studied, and the data interpreted, to aid in drug development?

Three possible ‘contexts of use’ are:

FED and the CDMRP program have been central in promoting biomarker research, and implementation of biomarkers in clinical drug development programs.  FED has supported Yetrib Hathout and the CINRG network to define the natural history of blood biomarkers in DMD, compare these to the mdx mouse biomarkers, and define response to therapies.

FED strives to be transparent in our work. Here are links to our most recent IRS form 990 and audited financial statements. If you have questions, please do not hesitate to contact us.

What is Duchenne Muscular Dystrophy?

The words “incurable” and “untreatable” have been closely associated with Duchenne. It is an X-chromosome disease that afflicts boys, and it will never be eliminated through genetic screening because the dystrophin gene is the largest gene in body – times ten – and thus much more prone to have flaws that are not inherited. The trajectory of this disorder is insidious. Duchenne boys typically are not diagnosed until they are four years old or older. They tend to get better in the so-called “honeymoon” stage, which usually lasts until the early teenage years. But their muscles are deteriorating and cannot regenerate. Dystrophin is part of the chemical glue that holds muscle cell walls together, and those walls eventually collapse and are filled with collagen that causes fibrosis. First the legs give out, slowly, then, the arms and upper body. The disease moves from skeletal muscle to smooth muscle tissue. Lungs and hearts deteriorate. Corticosteroid treatment forestalls the muscle deterioration, but steroids have terrible side effects such as making bones brittle. Unlike many single-gene-defect disorders that only strike at certain ethnicities or demographics, Duchenne is a disease that does not discriminate – it is the world’s leading lethal inherited disease, afflicting one in 3,500 boys. The incidence rate among all races is identical. As the world becomes more conscious of issues of racial disparity, it is clear that standards of care are resulting in disparate quality of life and certainly life expectancy among sufferers of different races. You get the picture. Duchenne Muscular Dystrophy is excruciating, ruthless, sadistic, and painful. More than anything, it is cruel. The FED’s mission is to identify, leverage, and bring to market treatments that will benefit ALL sufferers of this disease.